It was 2010 when Mike Cruickshank’s Bonus Bagging entered the market place as the definitive tool to help people make money from matched betting irrespective of whether they had any pre-existing knowledge of placing bets at bookmakers offline or online.

The fact that four years later it’s still going strong perhaps tells us all we need know to answer the question posed in the title of this post as to whether Bonus Bagging (or more broadly matched betting) is still working in 2014?

Rather than just tell you “YES IT IS!” I wanted to take a few minutes to write a more structured response to exactly why it still works and how so this supposed loophole has yet to be closed down.

Matched betting has been around for a long time.

In fact – it stems from the process of arbitrage (buy low, sell high) that has been around longer still and produced some of the richest stockbrokers in the world.

That said, until a revolutionary product such as Bonus Bagging hit the market matched betting wasn’t really something that could easily be entertained as a reasonable way to make money outside of those ‘in the know’.

Gambling has been around since the dawn of time and it is only really recently that it has started to become a little more accepted in modern day society and the stereotype gambler image of a scraggy hair, long coat wearing men that chain smoked their days away in smoke filled high street bookmaker premises begins to disappear.

Of course the beauty in Bonus Bagging is that you are never actually ‘gambling’ per se.

You are betting on all outcomes to lock in a profit in combination with bonus funds that the bookmaker awards you for signing up with them.

Still though – my previous observations are to point out it takes a little effort to take that small leap of faith and address your own pre-conceptions and thoughts about the gambling industry to which allows us to make such profits.

So how can it be that if thousands of people from all walks of life (male, female, 18 or 80) can for years on end rinse bookmakers for their bonus cash and continually get away with it?

Why do bookmakers continue to offer these bonuses and why aren’t they clamping down on bonus ‘abusers’?

Well first things first the bookmakers simply don’t have a choice but to offer these bonuses.

Go type the word ‘bookmaker’ or ‘sportsbook’ into Google and you’ll see how much competition there is out there!

If you’re a regular punter and are looking for an outfit to bet with then how would you chose who to bet with? People like free things. People like money. This is particularly true in the gambling industry.

Bonuses are used to both attract new customers to bookmaker websites and also encourage people to dig their money out their wallets and lay it on the table.

They make for a better value proposition and people love to feel like they’re improving their chances and getting more for their money.

We must also not underestimate the power of the betting exchanges where you will for the most part always find better odds than at a bookmaker. Bonuses are used to steer attention away from that.

To summarise: if bookmakers stopped offering bonuses then they would lose bucket loads of customers.

I’m in no way connected personally to any bookmaker so can’t vouch for any cold hard statistics but I would hazard a large bet (hoho!) that bookmakers make more money for the most part on their bonus promotions that lose it.

Would they make more money if there was no Bonus Bagging? Well who’s to say. A matched better loses their bets (and wins at the betting exchange) just as much – if not more – as everybody else. I’m sure we’re really not that much of a concern to bookmakers.

Advantage players are in such a minority. We are small fish in a very big pond.

In fact, William Hill have even stated that the industry does not have a problem with matched betting. “There’s no illegal element,” they said. “It’s a free bet and you can do what you like.”

But even if they did care more – what could they do about it? To be honest – not a lot!

For the most part the bets you are making are not going to look any different from that of a regular Joe. Unless you’re throwing silly money around on random markets (think German Volleyball – learn from my mistake!) then you’re not going to flag any suspicion.

If you’re incredibly unlucky and one day get a bookmaker account shutdown then it’s never the end of the world.

Account closures aren’t limited to matched betters. They extend to any kind of punter who the company deems unprofitable inclusive of those having success predicting your regular run-of-the-mill weekly Premier League fixtures.

Withdraw your cash, dump them and move on to the next. There’s plenty out there willing to throw some cash at you to get your ‘custom’.

Right now Mike’s Bonus Bagging product features a massive 20+ bookmakers that it will guide you to sequentially profit from.

There’s most definitely still a truck-load of money to be made from matched betting. Bonus Bagging is still very much alive in 2014 and profits are there for the snatching.

This isn’t going away.

If you’d like the opportunity to for a week trial of Mike Cruickshank’s excellent Bonus Bagging for the tiny outlay of £1 then click this link to proceed to this special offer sales page and get started.

Hi. I'm Chris and over the past few years I have made thousands of pounds through bookmakers and casinos.

In having run the online gaming gauntlet myself I've learnt that the house DOESN'T always win.. Through advantage play we can too!

Grab yourself a one week risk-free trial of Bonus Bagging for the measly sum of £1!

Thousands of others have walked before you and continually cream cash from the bookmaker's coffers. 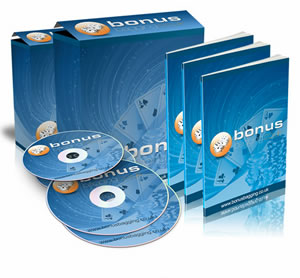 This product will pay for itself! DO NOT MISS THIS!